RAMAKRISHNA MATH AND RAMAKRISHNA Mission are twin organizations which form the core of a worldwide spiritual movement (known as Ramakrishna Movement or Vedanta Movement), which aims at the harmony of religions, harmony of the East and the West, harmony of the ancient and the modern spiritual fulfillment, all-round development of human faculties, social equality and peace for all humanity without any distinctions of caste, creed, race or nationality.

RAMAKRISHNA MATH is a monastic order for men brought into existence before 1986 and registered on 1901 by Swami Vivekananda (1863-1902) the Chief Apostle of Sri Ramakrishna (1836 - 1886) who was the great Saint of Bengal and is regarded as the prophet of the modern age. The main thrust of all Math centres is to cater the spiritual, intellectual and mental food towards the path of God Realization and basic welfare service according to the needs of the society.

RAMAKRISHNA MISSION is a registered society in which monks of the Ramakrishna Math and lay devotees co-operate in conducting various types of social services. It was founded in 1897 and registered in 1909 under Society Registration Act by Swami Vivekananda, who is regarded as 'One of the main molders of the modern world', thinkers and a leader with a prophetic vision.

Though the Ramakrishna Math and Ramakrishna Mission with their respective branches are distinct legal entities and financial identity, they are closely related, in as much as the Governing Body of the Mission is selected from Trustees of the Math, and several other ways. So both are to be regarded as twin organisations. The Math and Mission together have 189 branch centres all over the world of them 143 centres are in India.

RAMAKRISHNA MISSION ASHRAMA, SARISHA is one of the branch centre of the Ramakrishna Mission Belur Math, Howrah.

Started in 1917 as a meeting place for religious minded people and centre for serving, distributing help to the needy. It was almost defunct in 1920 after the death of Chief Organiser, Nalini Ranjan Mazumdar. It was revived and put on a working basis with the advent of Swami Ganeshananda on the scene. He felt the urge of serving the rural backward women in the midst of rural masses. His ardent desire materialized only when he receive the blessing of his Guru Most Revered Swami Brahmanandaji, the direct disciple of SriRamakrishna and first president of Ramakrishna Math and Ramakrishna Mission by the grace of Swami Brahmanandaji and other direct disciples the Ramakrishna Mission Ashrama Sarisha began its journey on December 25, 1921 as a branch centre of Ramakrishna Mission. Swami Ganeshananda's boldness was shown at its best when he stood up against all rural prejudices to start a school for girls and arrange for their education on the most modern lines, including physical exercise, and open air activities which were unthinkable for girls of that period, particularly in a rural area. 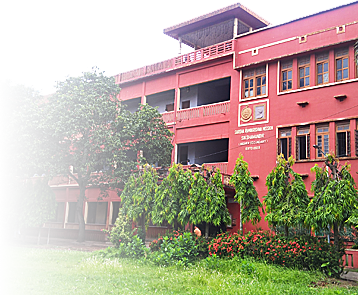 The Ashrama running all its activities based on the ideals of Serve Humanity as a entity of Almighty. All monks and volunteers are inspired with the twin ideals of self-realization and service to the world.

Sarisha Mission is well known for educational services for rural backward women in different sphere. It runs number of educational institutes with more than 3000 students and 400 trainees. Over 8 decades Sarisha Mission contributed in education, skill upliftment, women empowerment, other welfare activities and extension programmes with a new outlook creativity for the rural backward masses. The harmony of all human energy is one of the specialization of the Sarisha Mission where children, boys & girls, youths and aged are developed with positivism, man making and character building vision.